PIREP Reminder
by Froggie
PIREP Reminder
When you file flights it is important to use decimal
format as shown on the PIREP page of our site!
PLEASE USE THIS CHART: The staff thanks you

FRG_CFLv1_2018 Uploaded
by ashleyw
Consolidated Flight List
NOW POSTED!
This is a searchable spreadsheet of ALL of our hub routes.
Individual hub route's may be downloaded from the routes pages!
Be advised, there are errors including duplicate entries,
typos, distance variations ETC...
These errors are being worked on and the next version will show the corrections.
PLEASE PM ME ANY ERRORS ASAP!
With almost 5,000 routes, this may take awhile to complete. In the mean time
I suggest searching by ICAO as they have all been tested.
Do to many request - I decided to go ahead and post "as is".
Comments and route request as always are accepted. Fly Safe!
DOWNLOAD FRG_CFLv1 here
Edit by mod FRG007-
There are many mix up's on airport names but all ICAO codes have been validated!
I beg our members to report any errors or duplicate entries
KMSP is the 1st. edit for ver.2.0.2020

There are different threads here on different topics about getting those software apps working on Windows 10, but I was wondering if MSFS 2002 has (as maybe I missed it in the menus) or an addon could add Mini Controls to it.

In case you do not know what I mean by Mini Controls, I took a screen shot. The box in the far left hand corner of MSFS 98 is what I mean.

Please and thank you. 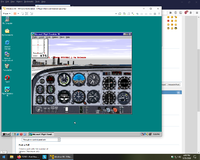 What happens when you say Yes, I am?
Wat's dis about?
by jimmy
I get dis every time I come on, wat's it about and am I da only one?

Flight sim on Windows 10, with GPS
by devon
Sounds like you need some new sims. Oceanofgames.com has FSX and FS2004 for free. It is a piracy site, but there are no viruses, and it gives you the highest download speed your internet plan will allow. I use it all the time because I'm cheap and I don't wanna spend my money on games. The new Microsoft Flight Simulator 2020 is coming out some time this year, too. It will require you to have some pretty crazy specs, like 150 GB of HDD Space, and 8 GB RAM, but I think it's worth what ever they will charge you for it if you have the specs to run it. Now, if you don't want to get a new sim, here's my opinion.

I wouldn't go with X-plane because the version you have is extremely outdated, and I would say it's only worth X-Plane over MSFS if you have XP10 or XP11. I also wouldn't recommend Fly II, even though it is from the same year as FSX, because it is not a mainstream sim, and addons won't really have much support, and I can't guarantee the server will work either, if you want to fly on it. MSFS 98 is a cool sim, but it is waaaaayyyy too old. You can run it, but it is complicated and won't look very good on a modern PC. Addons, especially non-plane addons (e.g. GPS, other software, etc), are virtually extinct nowadays. This leaves us with just FS2002, which I would recommend if you don't have the specs to run FSX or the new FS2020 coming out. FS2002 is highly supported by my server software, and addons are getting rarer, but they are still quite common on the web. It will also run fairly well on a modern PC. Its built in GPS will also be just fine. If you have FS2004, I would recommend that over '02, but if that's all you got, I would definitely go with FS2002.
Flight sim on Windows 10, with GPS
by trpted
If I posted this is the wrong area, please tell a mod/an admin so that it can moved to the right area.
I have a computer running Windows 10 and I have flight sims.
If I wanted to use a GPS with-in the flight sim, what one would you recommend:
#1 MS Flight Sim 2002 with built in GPS?
#2 MS Flight Sim 98 with a third party GPS program?
b) Because it is not built in, into 98 - Which third party GPS for this?
#3 Fly! II
#4 At last but not least, Xplane 5.52 or Xplane classic (same CD installer)
--
Not sure if Fly!II or my version Xplane I can get a GPS working or not, but I can with the MS ones.
and this list of flight sims that I have only talks about the General flight simulators and not military ones if any.
--
Please and thank you
Question about http://froggieair.byethost13.com/flt_sets.htm
by trpted
Ok.

I guess I have to keep my own records, private until I join as a Froggie pilot. But I not saying that I will join as a Froggie pilot at this time.
Thank you.
End of thread. Lock
Question about http://froggieair.byethost13.com/flt_sets.htm
by jimmy
If you are not a registered Froggie pilot (ie FRG123) then you cannot pirep your flights on Froggie Air, end of story and hopefully the end of the endless, useless questions.

www.yahoo.com/news/cessna-skycourier-just-took-first-120300217.html Jun 1, 2020 9:28:43 GMT -5
serge: yep seen the takeoff and the arrival in ISS, the new cockpit is outstanding much more advanced than all current developped aircraft cockpit, even the astronaut suit looks extremely lighter than the previous one(with nice stromtrooper design)

they all want your cake! what ever next?

now start cutting it up (the cake) remember to save some for the late ones!!!

the yellow rose of texas is on her way back, have all things up and running

then she could help me locate my golf balls?

Contacted Froggie in Texas, she will be home soon and we be back in business!!!

me still looking for my balls